The 26th Norfolk Young Musician Competition took place on Sunday 13 January at the John Innes Centre, Colney. Promoted by the Michael Badminton Young Musicians Trust, the adjudicator was the internationally renowned British viola player Philip Dukes, Artistic Director of Marlborough College, as well as a soloist and chamber musician in demand throughout the world.

Fourteen competitors took part including a number of string, woodwind and one singer. Trust chairman Jonathan Wortley commented that the general standard of the musicians was probably higher than ever. Philip Dukes praised all the competitors and gave them constructive feedback and encouragement on their performances before announcing the winners. 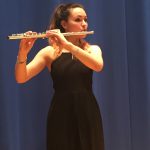 First place and the title of Norfolk Young Musician was awarded to 19 year old flautist Leila Hooton, a former pupil of CNS school now studying at the Royal Birmingham Conservatoire of Music. Philip Dukes said “Leila gave a performance of real conviction which bristled with energy”.

The Michael Badminton string prize was awarded to 18 year old Dylan Latham, currently studying at the Royal Northern College of Music, the Norfolk and Norwich Chamber Music prize for the most promising wind player to 16 year old bassoonist Joanna Asher, from the City of Norwich School, and the Jane Roberson prize for voice to 15 year old Charlotte Pollard from Norwich School.

The Michael Badminton Young Musicians Trust is very grateful for the support given by the Assembly House Trust, Norfolk and Norwich Chamber Music and Woodbridge Violins for this event.

Congratulations to all of the performers!

Calling all talented singer/songwriters or members of a band with

Norfolk Music Hub are delighted to invite you to join

Set the Tone – Track of the Week

Set the Tone – Track of the Week

The Set The Tone project is excited to launch the

Rehearse and Play with the British Army Band Colchester

Rehearse and Play with the British Army Band Colchester

Norfolk Music Hub are offering a fantastic opportunity for young