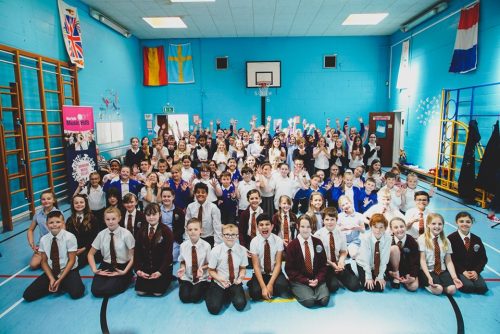 Over 350 children performed at Norwich Theatre Royal on Sunday 23 June as part of the Norfolk Schools Opera Project!

Norfolk Schools Opera Project was established by Norwich Theatre Royal in 1997. Over the past 23 years the project has worked with over 3,800 children and 360 teachers from across the county. This year, the Norfolk Schools Opera Project culminated in two performances of a specially-written children’s opera by 120 Year 5 students from four Thetford schools on the stage alongside professional singers, with over 250 children from 12 Norfolk schools singing from the audience circle.  The singers were accompanied by an orchestra of gifted and talented young musicians from schools across Norfolk playing live from the orchestra pit.

The newly-commissioned 50-minute-long children’s opera was adapted from Mozart’s classic The Magic Flute and renamed A Kind of Magic Flute. The scores includes traditional elements but also is brought up-to-date with modern influences such as salsa. The piece was commissioned by Norwich Theatre Royal and the Norfolk Music Hub, in association with the Come & Sing Company, and brought together by an exceptional creative team.

Leading up to the performances, children from Drake’s Academy, Admiral’s Academy, The Bishop’s Church of England Primary School and Redcastle Family School took part in a Residency Week, where each school worked on its own Act for the opera under the watchful eye of a professional theatre director and a vocal trainer. The opera has four acts in total, each lasting eight to ten minutes, then the dramatic finale brought all four schools together.

Since November 2018, pupils and staff have worked with the project to explore the world of opera. They have been involved in teacher training workshops, singing workshops, backstage tours, and a performance of English Touring Opera’s Paradise Planet. Together this gave participants a wealth of musical opportunities to take part in as well as supporting their learning in other subjects and developing a range of personal, social and transferable skills.

The project will have a lasting legacy in the form of a resource pack which is being put together by the Theatre Royal with supporting music to be used as an education aid tied with the National Curriculum. The opera and resource pack will be free to Norfolk schools through Norfolk Music Hub, and on sale to other music services and organisations around the country.

As part of that resource, the music for the opera was recorded at Wayland Academy in Watton in April 2019. It was the first experience of working in a recording setting for the 20 advanced gifted and talented young musicians, aged 14 – 18, who were accompanied by a small core of adult musicians (making an orchestra of around 35 in total), three soloists and a choir of 16 from the King’s Lynn Festival Chorus, providing the melody parts on the recording for the younger singers to learn.

Gillian Shaw, Area Manager for Norfolk Music Service, said: “A major part of this educational project was about offering the gifted and talented young musicians of Norfolk an opportunity to experience a professional recording situation.  To think that a band of young musicians could receive parts and turn around and record a 50-minute opera within a fortnight is almost unimaginable. They surpassed our expectations and their commitment, energy and absolute professionalism is amazing.”

The Theatre Royal’s learning and education manager John Simpson-Wedge said: “We have run education projects at the theatre for over two decades under the title Norfolk Schools Project. This has now become the Norfolk Schools Opera Project and has been expanded out to reach more schools and have greater impact on participants than previously. We are very excited to be growing this much-loved programme and can’t wait to share the results of everyone’s hard work.”

The children involved in the project will also take part in the Music for Youth MFY Proms at the Royal Albert Hall this November where they will perform a shortened ‘medley’ version of the opera, alongside an orchestra made up of the Norfolk County Symphonic Wind Band and Norfolk County Strings.

We need your help to get the 600 children taking part to London for this amazing opportunity.

Pupils from across the UK are invited to take part