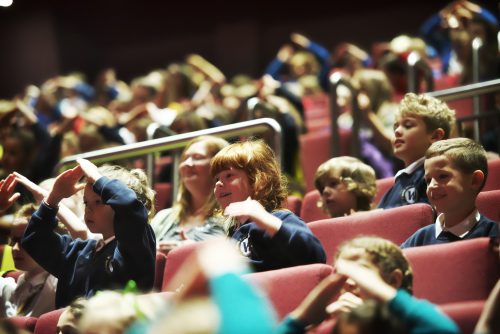 We were privileged to be asked by Music for Youth to host young performers at the Primary Proms in Norwich on 9 October 2018.

The Music for Youth Primary Proms provide primary school children with the opportunity to experience live music in major concert halls across the UK, and encourage their involvement with music. Aimed at Key Stages 1 and 2, Music for Youth’s Primary Proms inspire and motivate the next generation of music makers and develop their musical potential. These concerts take place across the country throughout the year and are performed by young people, for young people, providing first hand experience of live music-making in a fun and engaging environment.

On Tuesday 9 October, two concerts were held at Norwich Theatre Royal, with over 2000 children and young people from 36 Norfolk schools in attendance.

By attending the Primary Proms, pupils took part in activities which contributed towards an Arts Award Discover. For this, schools were given a free creative resource pack including a comprehensive lesson plan and Arts Award Discover log book for pupils to complete in classrooms, including researching brass instruments, choirs, and how to be a conductor. The resource pack also included guidance for the Primary Proms to help pupils understand some of the terminology that is frequently used in concerts, who was performing, and what to listen out for when the music starts.

The concerts were presented by Rachel Leach, composer, animateur and presenter, who has worked within the education departments of many of the UK’s orchestras and opera companies. Rachel introduced the captivated audience to the exciting range of musical instruments and styles heard throughout the concert, and also led fun challenges for audience participation, including practical listening and rhythm activities, and some tricky dance moves!

Each Prom concert showcases young performers from the local area in a variety of ensembles and music groups. The performers at the Norwich Primary Proms were:

Cantabene: [pictured] a choir of students aged 12 – 18 from Springwood High School, King’s Lynn, who’s spine-tingling performance of ‘Lean On Me’ got the concerts off to an amazing start!
Cantabene has previously performed at the Music for Youth’s National Festival and will also be performing in the upcoming Lest We Forget Children’s Remembrance Concert in Birmingham.

West Lynn Strummers & Drummers: an enthusiastic group of Year 5 musicians who have benefited enormously from the Whole Class Ensemble Teaching delivered by Norfolk Music Service. They receive 45 minutes of specialist music tuition each week where they have engaged with all sorts of different genres of music. Their showstopping performances featuring bucket drums, ukuleles, singing and choreography had the whole audience dancing along!

Norfolk County Strings: an advanced ensemble with players aged 11-18 from three of our Music Service county ensembles, conducted by Helen Stowell and Hefin Miles. They performed a great orchestral rendition of Ed Sheeran’s ‘Thinking Out Loud’, which got the audience singing along.

Norfolk County Symphonic Wind Band: one of the flagship ensembles of Norfolk Music Service, who performed a very exciting programme that got children dancing in their seats. The ensemble sounded polished and professional, and their topical choice of the Doctor Who soundtrack was extremely popular.
The ensemble are featured on the BBC Ten Pieces website performing ‘Mambo’ & ‘O Fortuna’ and performed at the Royal Albert Hall for the Music for Youth Prom last November.

Thank you to Music for Youth for bringing this unique experience to Norfolk!