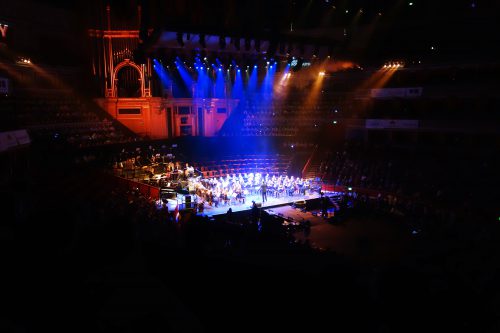 The flagship wind band ensemble for the Music Service took to the stage at London’s prestigious Royal Albert Hall having been selected from thousands of ensembles to perform.

The Norfolk County Symphonic Wind Band once again produced an outstanding performance on Wednesday 15 November, giving them national recognition as one of the most innovative and energetic youth ensembles in the country.

This was the first time a large youth ensemble led by the Music Service had been selected to perform at this prominent event since the Norfolk Student’s Jazz Orchestra, under David Amis, was selected in the 1990’s, so there was much celebration by the musicians and staff involved.

With around 1000 young performers from all parts of the UK and a massed performance by Hull Music Hub and Kingston-Upon-Hull Music Service, the event was filled with excitement from start to finish. The evening concluded with a song by a massed choir made up of every performer, complete with balloons and confetti in a spectacular finish.

David Stowell, a Music Service tutor and conductor of the band, said: “This is a fantastic opportunity for the Norfolk County Symphonic Wind Band but no more than the players in it deserve. They work with such dedication, professionalism and are supported by the amazing teachers from the Music Service. I feel very privileged to work with this incredible group of musicians.”

Hannah, a trumpet player in the band, said: “Usually we just play in local areas so coming to London is a really exciting thing. A concert at the Royal Albert Hall is a massive event!”

Keiran, a trombone player in the band added: “To play at the Albert Hall is big; it’s a piece of heritage. It’s inspiring to be on a prolific stage where so many famous people have played and shared it.”

The Norfolk County Symphonic Wind Band is one of the Music Service’s flagship ensembles made up of 57 advanced instrumentalists aged between 12-18, many of whom are taught by Music Service tutors in High Schools across the county and progressed from playing in the Music Service’s junior wind bands. The bands, including bassoonist from City of Norwich School, Joanna, were also featured on BBC Look East ahead of the Music For Youth Proms performance.

Pupils from across the UK are invited to take part