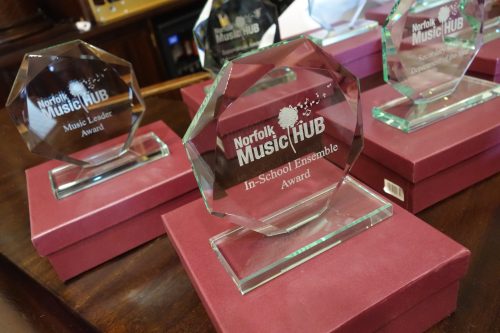 Nominations for the Hub Awards 2019 are now open!

We are delighted to launch nominations for the Hub Awards, which will be announced at the end of our Expo event on Thursday 17 October.

Each year we hold an awards ceremony, to recognise and celebrate the hard work that individuals, schools and organisations put in to music education across Norfolk.

The following categories are open to anonymous public nominations via our online form, which will close at 5pm on Thursday 10 October. The nominations will then be shortlisted by the Executive Board for Norfolk Music Hub and nominees will receive a phone interview to select the winner.

Our nominations are now closed.

The Orchestrate! Project is holding an orchestral ‘Play Day’. This is

An evening of music performance from up and coming talented

Unfortunately Latitude Festival is not going ahead in July 2020.

A collaboration between Holt Hall and Norfolk Music Hub Sounds