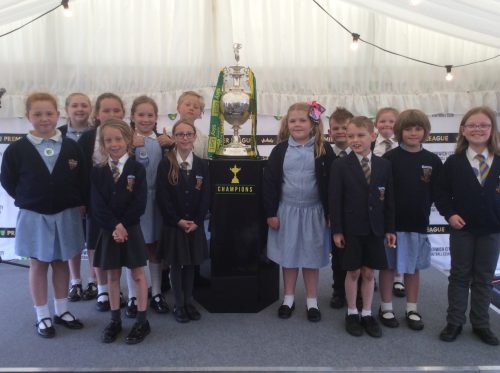 Students from two Norfolk schools celebrated the Canaries’ promotion to the Premier League with a new take on the club’s rousing anthem.

Their rendition of ‘On the Ball City’ was the brainchild of Stuart King, City fan and governor of Peterhouse Primary School in Gorleston. He wanted to mark the Canaries’ return to the top flight by combining the song’s traditional spirit with a new twist.

Mr King wrote a new introductory verse and lyrics. And with the help of the Peterhouse Primary choir and students from East Norfolk Sixth Form College, also in Gorleston, the new version of ‘On the Ball City’ came to life. Carl Simmonds, a tutor at East Norfolk, recorded the melody and the students singing.

Philippa Collingwood, class teacher at Peterhouse Primary Academy, said: “It is a privilege to be part of a key moment in NCFC history. This is the oldest club song written especially for a club.”

“There are 21 children in Peterhouse Primary Academy KS2 Choir. They call themselves the Dream Team and love to sing together. Recently they have performed on Stage at the Royal Norfolk Show (organised by Norfolk Music Hub), where they also were asked to perform for the Diocese of Norwich. They enjoy taking part in events with other Great Yarmouth Schools, such as the Summer Serenade and the Annual Festival of Carols.”

“I am so so very proud of them and the whole choir – their talent, their enthusiasm and their courage!”