Was this the biggest singing event that Norfolk has ever seen?!

We probably broke a few records on Thursday 3rd May, when around 9000 children and their teachers came to the Norfolk Showground to sing together at our Big Sing festival! Over 100 schools were involved and had travelled from all parts of the County, with some schools bringing every pupil.

This huge event was the first of its kind for Norfolk Music Hub and featured a live backing band from Access Creative College, ten singers from ACM Gospel Choir and was led by TV choirmaster Mark De-Lisser.

We also welcomed some very special guests to the stage to inspire the young singers. Alexandra Burke surprised the crowd with her appearance, singing Hallelujah and Bad Boys. Her performance was followed by Kirsten Joy, vocalist for Clean Bandit, who sang their chart-topping single Symphony.

The Norfolk Showground arena was also packed with over 2000 of the children’s parents and families who had come to watch. 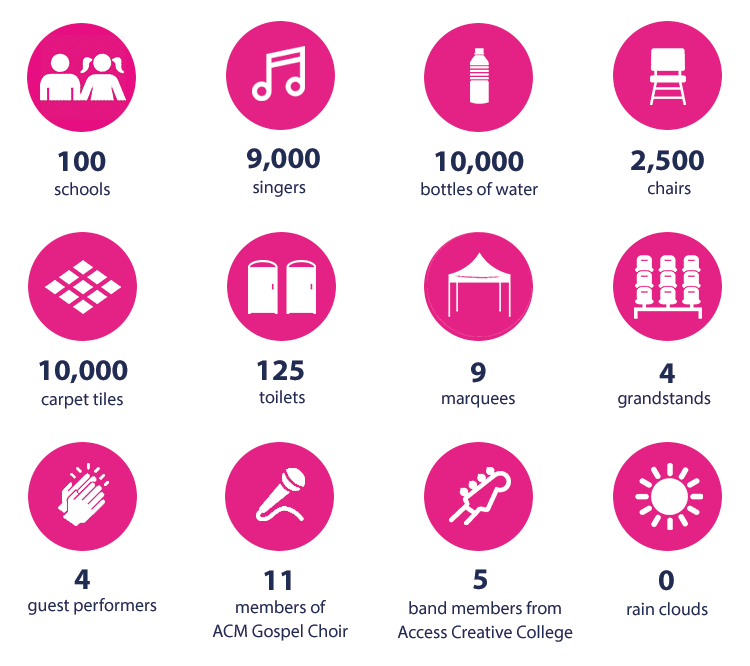 The schools had been preparing the list of songs in the classroom for several months leading up to the event. The theme was unity and the songs were chosen for their positive messages, including Happy by Pharrell Williams, Shine by Take That, and Wonder by Emeli Sande. There were also choreographed dance moves and sign language incorporated in some of the songs.

Alison Corfield, Norfolk Music Hub Lead, said: “The Big Sing was something that I had been considering for a long time and while we always knew that this event would be popular, we were absolutely blown away by the response from schools.

We’ve had a phenomenal day and the sun made a welcome appearance to add to the festival vibe! Everyone enjoyed singing, dancing and having the most wonderful time together.

Through preparing for The Big Sing, schools worked so hard and incorporated singing into their daily routines. An event like this just really shows what the power of singing can do and how important it is for pupils’ development, wellbeing and also as part of the wider educational context. These children will remember The Big Sing for the rest of their lives and it has hopefully ignited a life-long love of singing for them. The teachers all looked like they were having an absolute ball too!”

Among the schools taking part was Wayland Junior Academy. Harriet Beckett, Deputy Principal, said: “We are very excited to bring our whole school. We believe that this opportunity was too great to limit it to just one cohort of children thus wanted to include everyone. Children and staff worked incredibly hard in preparation for the event and it’s so exciting to join thousands of others and sing our hearts out!”

Another school was Woodlands Primary School. Damien Ainslie, Music Teacher, said: “I decided from the offset to bring all of our children in Key Stage 2. This involves 240 children and they have been so excited and engaged while learning the songs in our weekly singing assemblies. The children love the songs they know like Happy and Wonder but also really enjoyed learning the new songs like My Fantasy Football Team.” 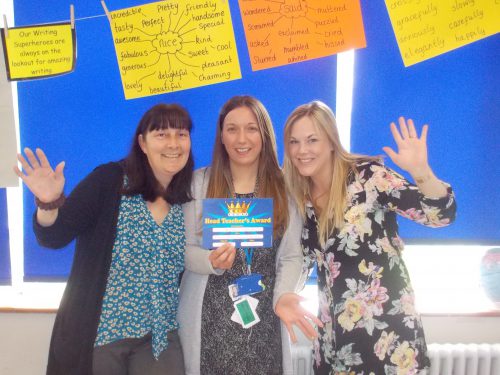 The Headteacher of Kinsale Infant School, Louise Robinson, was so impressed with their staff and pupils who attended The Big Sing that they gave them a Headteacher’s award. Louise said: “I gave my staff who led the trip to The Big Sing the Headteacher’s award because they danced and sang enthusiastically the whole way through, modelling to the children how to behave at a concert, as this was the first time many of our children had seen live music on a stage. The trip was very well organised by Mrs Coughlan, the children were prepared and it was a very successful day, enjoyed by all who attended.”

Norfolk Music Hub would also like to thank Royal Norfolk Agricultural Association, Norwich City Football Club and all of the schools, staff and parents for their support towards this event.

Norfolk Music Hub would like to invite you to attend our

Firespinners is an all-male transitional choir that has been running

Firespinners is an all-male transitional choir that has been running

Norfolk Music Hub is delighted to launch a new project