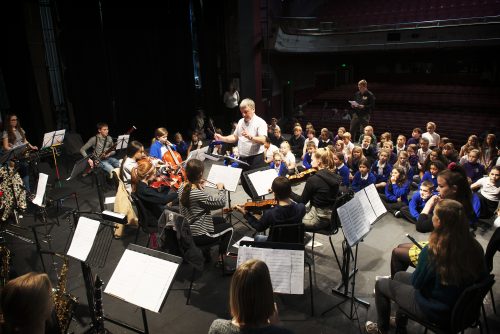 Help us get 600 children to London to perform a massed ensemble performance of a new children’s opera!

Norfolk Music Hub and Norwich Theatre Royal have been invited to put on a Massed Ensemble Performance in the 2019 Music for Youth Proms at the Royal Albert Hall! We need your help to get the 600 children taking part to London for this amazing opportunity.

Donate at our JustGiving page

What is the Norfolk Schools Opera Project?

NSOP is a project for Key Stage 2 pupils across Norfolk in which pupils create and perform their own opera alongside professional artists at Norwich Theatre Royal. 600 Norfolk pupils will come together to tell this fantastical story of magic, conflict and the power of love.

A Kind of Magic Flute is a brand-new children’s opera fusing Mozart’s Magic Flute with a little twist of Latin-American Salsa music. The score weaves together extracts from Mozart’s original opera, arrangements and adaptations of some of the operas most famous melodies and sections in which fragments and motifs from the original score are woven into entirely new music. Jonny Gee, Jonathan Preiss & Ellie Bowers-Jolley have worked together as a creative team to produce the new children’s opera.

What is the Music for Youth Prom?

The Music for Youth Proms showcase the extraordinary talent from thousands of the UK’s young musicians, creating an unforgettable experience for the groups performing and the audience.

Each year, Music for Youth presents Massed Ensemble Performance Projects at each of its spectacular MFY Proms showcase concerts in London’s Royal Albert Hall in November. The concerts showcase exceptional performances from some of the UK’s most creative, innovative and accomplished young musicians. They provide a snapshot of good practice in music teaching and learning currently taking place across the country. Massed Ensemble performance projects are the cornerstone of the Prom concerts, involving around half of each night’s 1,000 young performers.

600 Key Stage 2 children taking part in the Norfolk Schools Opera Project will be performing selected highlights of A Kind of Magic Flute on 13th November at the Royal Albert Hall. Accompanying a choir of children from across the County will be an orchestra made up of talented young musicians from Norfolk Music Service ensembles, including the Norfolk County Symphonic Wind Band, who celebrated success at the Music for Youth Prom in 2017.