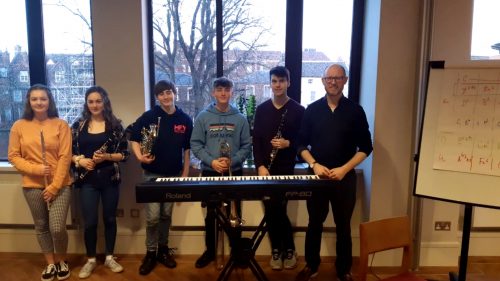 The Norfolk Schools’ Opera Project has launched for 2020.

The schools will work towards a public performance at Norwich Theatre Royal on Sunday 28 June 2020, as part of the Young Norfolk Arts Festival. The Birdland project is a co-commission by Young Norfolk Arts, Norfolk Music Hub and Magdalen College School Oxford and is published by Oxford University Press. The composer is Bob Chilcott and the librettist Charles Bennett. The Come & Sing Company will be delivering the project in schools.

Bob Chilcott says: “For us a major consideration was to make the piece as flexible for performance as we could. We have tried to make the solo roles interchangeable, in that they can be sung by any voice part. Even though the piece is fundamentally designed for young singers, the solo roles can equally be sung by adults or by young voices and adult voices combined. The work is scored for an ensemble of ten players, but it can also be performed with just piano or piano with the help of percussion and bass guitar or double bass. In the same way we have tried not to be too prescriptive about stage directions. Even though we have tried to imagine the temporal shape and pacing of the piece through the scoring and narrative, we hope that there will be plenty of scope for creative staging. We imagined that the piece could include dance and movement. We hope that, ultimately, the nature of the piece might be able to stimulate and encourage as imaginative and broad a palette of ideas as possible, when bringing it to life.”

Young Norfolk Arts Trust is also commissioning a group of young creatives to develop visuals and digital backdrop design for the performance.

Following a short song from Pip the sparrow, the Dawn Chorus enter and congratulate themselves on their perfect singing. After discussing the horror of the possibility of a sparrow being able to sing, Pip enters and performs a shaky, unconfident version of the song that burns within him. The Dawn Chorus express their disgust, and the Head Chorister offers to take Pip to the Doc Rocks Peacocks – music experts who created the fabled Golden Nightingale. He signs their contract, and they attempt to brand Pip as a star – but their transformation fails, and he is banished to the Bewilderness. Here he meets the infamous Birds Who Should Never Be Heard, who are no help to the forlorn sparrow. All seems lost, but a pair of friendly owls soothe Pip with a lullaby, at the end of which the Golden Nightingale enters and reveals she is trapped by her contract with the Doc Rocks Peacocks. Simultaneously destroying their contracts, Pip and Golden Nightingale sing a duet celebrating their freedom. The Golden Nightingale’s solo encourages Pip to sing with his true voice, ignoring the criticism of others, which, at last, he does. Finally, all the birds sing together in the ‘dawning on me’ joyful dawn chorus, celebrating Pip’s achievement and the joy of singing together.

The Norfolk Schools’ Opera Project runs a year of learning and participation activities to support the final performance. This year’s project started on Sunday 9 February with a creative workshop for advanced young musicians from Music Service ensembles, led by music educator Dr Jonathan James, ahead of a concert by the Iceland Symphony Orchestra at Norwich Theatre Royal, which the young musicians attended free of charge. These musicians will be playing in the orchestra pit for the opera performance in June.

Jonathan James said “They were brilliant! Adventurous, quick to learn and joy to create music with. Lovely tone and technique as well. Well done to them all.”

Even when backing tracks are provided, most non-specialist teachers would

Norfolk Music Hub is delighted to be welcoming London Mozart

Soloists and smaller ensembles from Sistema in Norwich will perform

There are opportunities for musicians of any age to get

Norfolk Centre for Young Musicians is a division of the Guildhall

The 2020 Walter Hussey Composition Competition is for composers aged between 16–24.

PLAY UP launches in West Norfolk

PLAY UP launches in West Norfolk